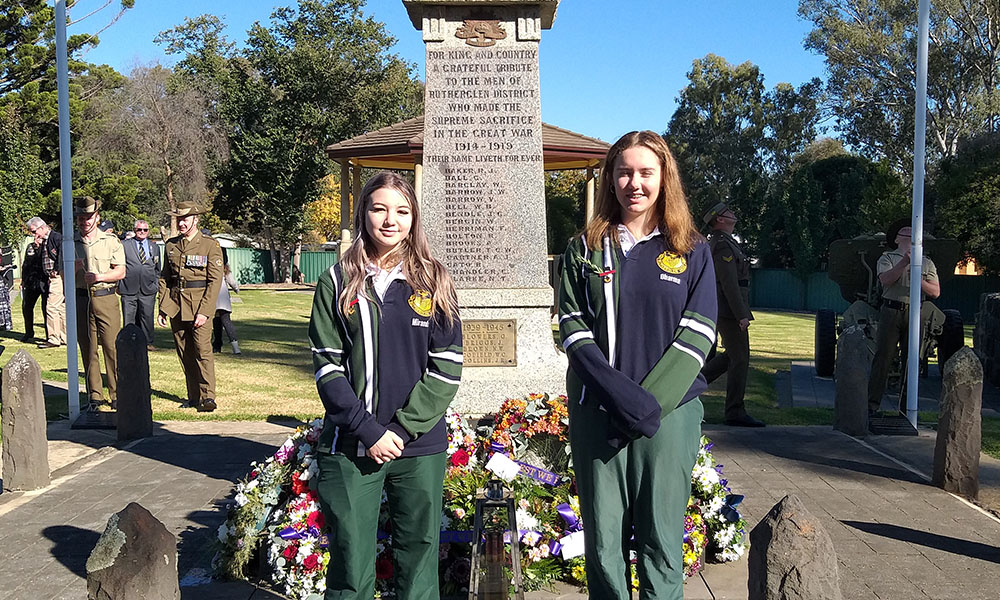 Once again Rutherglen High School was well represented at the ANZAC Day march and ceremony. Thank you to the students who participated. Well done to Lochie Arnold marched with the 33ACU Army Cadet Unit in Wangaratta.

2021 School Captains, Dharma Kotzur and Miranda Pleming laid a wreath, and spoke very eloquently on behalf of our school community:

This year Australia celebrates a century of the Royal Australian Air Force (RAAF) and their numerous contributions to our society in both conflict and upholding peace.

The Australian Air Force officially formed on March 31 1921 so this year marks one hundred years of service and today, on ANZAC day, we take the time to recognise and pay our respects to some to the members of our community who have served in this branch.

Today we want to recognise and remember an RAAF Rutherglen hero from World War II – John Hudson Wilkinson. He was born on the 18 of February 1914 in Rutherglen, our local hero grew up during the First World War to enlist as a soldier during WW2. Before volunteering Wilkinson was a pharmaceutical chemist, his dedication to helping people already evident in these early stages of his life.

On the 2nd of September 1940, John Hudson Wilkinson joined the Royal Australian Airforce, as a pilot in unit number 83. It was in the Department of Air that flying officer Wilkinson, who was attached to a Pathfinder Squadron, was awarded the Distinguished Flying Cross in the March of 1944. He was promoted soon after, reaching the rank of Lieutenant. Reports claimed him as exceptional, a local newspaper even writing about his achievements and feats.

“Pilot Officer Wilkinson is an air gunner of great ability and determination. He has taken part in a large number of operational sorties, many of which have been against some of Germany’s most heavily defended targets. On one occasion, in March 1944, when engaged in an attack on Stuttgart, a Junkers 88 pilot attacked the aircraft five times, but Pilot Officer Wilkinson, by his accurate directions to his captain and coolly aimed return fire, drove off the enemy aircraft in a badly damaged condition. At all times, his unwavering devotion to duty and constant alertness have inspired confidence in his crew.”

Unfortunately, as many do during war, our local pilot lost his life fighting for the allied forces. John Wilkinson had flown many missions between 1940 when he joined the RAAF and his final mission in 1944.

A newspaper clipping dealt the devastating news that the R.A.F. pathfinder, John Hudson Wilkinson had been reported missing and presumed to have lost his life in air operations over East Prussia on the 30th of August, 1944.

Wilkinson died before he could see the end of the war, but we are here today to thank him for his contributions to the war effort, because his sacrifice has allowed us all to live peacefully in the country we call home.

John Hudson Wilkinson’s story is just one of many, and whilst we are honoured to have been able to share it with you today, we also bow our heads and pay our respects to those who served but were not individually mentioned today.

Copyright Rutherglen High School 2021 - All Rights Reserved
Back To Top
×